Angelica is a PhD student in Human Development. She graduated from the University of California, Davis and received her B.A. in Psychology and a minor in Chicana/o Studies. As an undergraduate, she was captivated by the individual processes of self-regulation, affective development, and the internal/external factors that shape an individual’s psychology. She hopes to continue studying how these elements interact with one another to shape our relationships and is especially interested in analyzing diverse populations to understand how changing variables affect one’s outcome across childhood and adolescence. 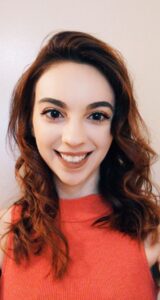 Andrea is a PhD student in Human Development. She graduated from Penn State and received multiple B.A. in Psychology, Sociology, and Criminology and M.Ed in Higher Education and Institutional Research. After working as a project coordinator in several labs at Penn State, she became interested in the effects that internalizing and externalizing disorders have on the adolescent brain. In her graduate career, she hopes to continue to study these effects, especially in diverse populations in the United States and globally.

Maddy is a Ph.D. student in Human Development. She graduated from Temple University in Philadelphia, PA with a B.A. in Psychology and a minor in Cognitive Neuroscience. During her time as an undergraduate and later as a post-bac research assistant at Temple, she became interested in the neural correlates of developing mood disorders in adolescents as well as understanding how sociodemographic characteristics can contribute to risk. In her graduate career, she plans to pursue research on how individual differences in brain activity and risk profile may help us predict the development of depression in underrepresented populations.